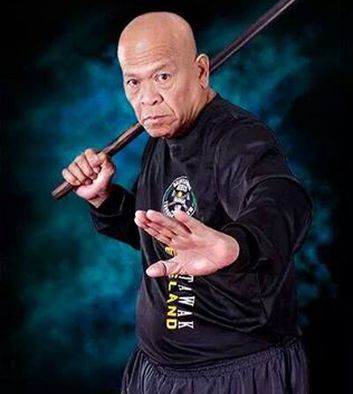 I first met Bobby through his wife, Luz Quinio, a co-alumna of the University of the Philippines, at the main social event of the Filipino-Americans in the Carolinas, the 13th Annual Gala Night,which was held in October at The Oasis that year, where then NC Congresswoman, now Senator Sue Myrick was Guest Speaker. Little did I know that within the next two years, I would be chairing the same event where a record crowd of over 600 attended, as 1st Vice President of the Filipino American Community of the Carolinas in 2002, and eventually taking over the helm the following year as FACC's 13th President Bobby and Luz are among the staunchest supporters and tireless volunteers of the Filipino community in Charlotte.

My husband Manolo and I got to know them better when we relocated from Madrid, Spain & Vienna, Austria, where we have lived while I was working for more than 15 years with the United Nations International Atomic Energy Agency, first as an Area Officer for Asia & the Pacific for Technical Cooperation projects in Atomic Energy, and later as Nuclear Safeguards Inspector of nuclear installations & facilities in Japan, Korea & China.

We have often visited the World Headquarters of the Balintawak International established by Bobby in 1991 in Charlotte, with his closest friend and student, Mecklenburg Deputy Sheriff Irwin Carmichael. We discovered that aside from being Grandmaster, developer and foremost exponent of the "Balintawak Arnis Cuentada" which is a collateral system of Filipino Martial Arts, Bobby is a wonderful singer and a great cook.

Bobby would tell us about the hard knocks he received while still a boy fighting in the streets of his birthplace, Cebu City, the oldest city in the Philippines, and home to the oldest religious relic of Filipino Catholics, the blessed Santo Nino or Child Jesus, a gift of  Magellan, the "discoverer" of the Philippines, to the King and Queen of Cebu, on their conversion to Catholicism in 1521. His father Sergio, taught his eldest son the Filipino martial art, "arnis" when he was only 12 years old, and eight years later, Bobby embarked on a difficult and often brutal training under the tutelage of Master Teofilo Velez of the Balintawak Self Defense Club in the same city.

It is based on Bacon's Balintawak system, so named after the street in Cebu City where the first Balintawak Arnis Club was founded. (Balintawak, now Caloocan, is a significant name in Philippine history as the place where the secret revolutionary society, the Katipunan under the hero Andres Bonifacio, had a general meeting on 23 August 1896 to decide when to start the fight for freedom from the almost 400 years of Spanish colonial rule, with the signal cry, "Mabuhay and Filipinas, Mabuhay ang Katipunan" or "Long Live the Philippines, Long Live the Katipunan". Two years after the successful revolution, the first republic in Asia was proclaimed in Kawit, Cavite on June 12 , 1898, with General Emilio Aguinaldo as its first president).It is a fitting name for a worthy Filipino martial art form, which as been popularized worldwide by Grandmaster Bobby Taboada.

The Balintawak arnis method focuses on the use of a single stick and empty hands, concentrating on close range fighting tactics, and can be classified as a "modern system' , a composite of several fighting methods, as opposed to the ancient and classical methods.

His "cuentada" system (from the Spanish word, "cuentar" or "to counter") somehow follows a basic principle of physics and mechanics: the equality of force and counterforce. For every resultant force, there is an equal and opposite reacting force.  As applied to the practice of Balintawak arnis cuentada, this mastery of the offensive and defensive movements requires a series of well planned movements, wherein the opponent cannot but reply with a corresponding set of forced movements and reactions.  In this way, the opponent is always kept under complete control.  A true master of the art can therefore predict with precision, which part of the body of the opponent he will target and hit.

Grandmaster Bobby and his Filipino martial arts form has been written up in various national & international publications: among them, a several page spread article illustrated in color in a popular US national sports magazine, a full page article in a regional newspaper, The Asian Herald, several book & magazine  citations, and a whole chapter in an outstanding Filipino martial arts book, "Filipino Martial Culture", by Mark V. Wiley.

Wiley gives an interesting and scholarly treatise of Bobby and his Balintawak Arnis Cuentada, as well as all known Filipino martial arts.  His research spanned a period of 18 years of "participant observation", whereby he was able to obtain direct information from the actual living masters and practitioners of the art, traveling around the world in search of his original info sources.  Furthermore, he was able to obtain oral historical information on the evolution, development and techniques of existing Filipino martial art systems.

This is quite a feat considering the paucity of written documentation on Filipino martial arts. Much of the possible sources like records, writings (pre-Hispanic writings were done on perishable materials like bamboo cylinders), cultural artifacts like weaponry, etc., must have been destroyed due to the various invasions of the Philippines, cultural or otherwise, by the Spanish, Dutch, British, Japanese and Americans..

On the other hand, research writers can still have access to abundant Chinese classical texts for the Chinese martial arts; still extant family-owned manuscripts for the Indian martial arts, and the well guarded and highly prized densho transmissions scrolls for the Japanese kind.

A mere twelve years ago, he begun the official worldwide promotion of the system which he developed, the "Balintawak Arnis Cuentada", principally at the Martial Arts Training Center of the Balintawak International Headquarters in Charlotte, NC, holding regular classes there, with select local and foreign students, who are either martial arts instructors themselves, black belts or advanced students of other styles. His strict criteria for acceptance at his schools are maintained: maturity, discipline, and the capacity to absorb his skills & techniques.  He also teaches at the various Justice Academy of Law Enforcement agencies with Dep Sheriff Carmichael, which has gained more value and importance in the light of the aftermath of the massive national tragedy of September 11, 2001 and the ever imminent danger of terrorist attacks. He conducts frequent seminars all over the US, Canada, Europe, New Zealand, Australia and Asia, demonstrating the technique at international tournaments. A popular complement to his actual classes are the training videos which he has produced and are in much demand.

The odyssey of the young warrior boy, bloody and exhausted, but persevering, training under expert but strict masters in his native Cebu City, getting his first break when he caught the eye of a martial arts master who wanted him to teach his impressive skills at his school in faraway New Zealand he knew nothing about, embarked on the journey of his life with only the flimsy tropical shirt on his back in the dead of the winter in the land down under, with empty pockets and hardly knowing a few words of English.

Today, bestowed with several distinguished awards and international recognition, the culmination of his  saga was when he was inducted into the International Hall of fame of the prestigious worldwide Martial Arts Grandmasters Council, the World Head of Family Sokeship Council, for his numerous outstanding accomplishments in the art.  Aside from the many schools based on his system established by his students worldwide, as further proof of his mastery and success, eleven of his students were also given awards in different categories by the distinguished world body, in the same ceremony on August 31, 2002 in Orlando, Florida.

Acclaimed in matches with the best martial arts masters of the world, receiving their highest praise for his excellent mastery of his art, Bobby, soft spoken and ever modest, gives this piece of advice to would-be masters: dedicated training and constant workouts to give you fast reflexes, perfect coordination and top agility. And that is the practical essence of the Balintawak Arnis Cuentada system epitomized by Bobby Taboada: "the tactical awareness, continuous anticipation and selective follow-through with a conscientious and unfolding tactical mind".

In this book, he shares this wisdom earned with his blood, sweat & tears, and the remarkable secrets of a true Grandmaster, disciplined and devout to his art, at the same time compassionate and caring. More power and success to you, Bobby!