Bobby Taboada was born in Cebu City, Philippines, on November 6, 1948, the oldest of five children of Sergio and Gabriela Taboada. He grew up fighting in the streets of Cebu, (not because he was a troublemaker but because it was the only means of survival on the streets). He is soft spoken and very slow to anger except when he rises in defense of himself that is infrequent and almost nil.

He was first introduced to eskrima by his father. He also boxed for six years and went into the exotic and imported arts of Karate and Kung Fu. Bobby left home when he was twelve and later lived with Teofilo Velez as an “adopted” son as well as a student of eskrima. That literally meant sitting at the foot of the master in full obedience and loyalty in his search for knowledge and wisdom. He then learned the secrets of Balintawak Eskrima from Jose Villasin and Venancio "Anciong" Bacon. Bobby discovered that the art was deadly, effective and sophisticated. As a fearless and undaunted volunteer for fights and tournaments, Bobby was trained by all the Balintawak masters in the practical aspects of combat fighting. In this light, it must be emphasized that in the Philippines, eskrima is not a sport in the traditional sense of the word and therefore not governed by safety rules. It means combat fighting and sometimes fights to the finish (bahad). Only lately have there been efforts to make it safe as a sport. Bobby is a long way from the street battles in Cebu, where he has experienced violent and deadly fights, some with multiple opponents. He has also witnessed full contact duels (bahad).

Bobby eventually broke the bonds of poverty after meeting a New Zealander, Peter Ball, who took him to New Zealand. He lived in New Zealand for 12 years and almost a year in Australia and now currently lives in Charlotte, North Carolina, USA, where he has established his Balintawak Headquarters. He is now on a mission to promote Balintawak worldwide. His primary emphasis is on defense techniques, which he has continuously researched, tested, re-tested, innovated and improved. He teaches law enforcement officers, martial arts instructors, black belts and advanced students from all styles of martial arts, who he thinks have attained the maturity, discipline and capacity to absorb the skills and techniques. In his 40 years of experience in martial arts, he contends that the hardest thing to learn is how to defend. The easiest thing to learn is how to strike, hit, punch or kick. That is why the techniques he teaches places primary emphasis on defense.

In 1991, Sam heard about an eskrima seminar in Phoenix supposedly held by Bobby Taboada from Cebu. Sam went to check it out, to his great surprise and delight; it was his stable-mate. Bobby was attempting to seek permanent home in the United States. There was a fraternal bond between them due to their common training under Velez and Villasin. Bobby lived in Sam’s townhouse for about a year. Fallout with his partner Peter Ball, eventually lead him to North Carolina. There, he established new alliances with Irwin Carmichael who he met in Australia at a martial arts seminar. Bobby has since resumed his extensive seminars in various parts of the United States and worldwide.
Bobby Taboada has made several video tapes for commercial worldwide distribution. He has incorporated original and innovative exercises and drills and even fancy stick twirling, amara. Amara was frowned upon by the masters as signature showboating moves of the rival club. This has been assailed and criticized by purists as a desecration and defiled version of the Grandmaster’s art. They are however, eye catching and they do sell tapes and seminars. Today, Bobby Taboada is the most visible advocate of the Balintawak style of eskrima. Bobby is a long way from the oppressive slums of Cebu City. He is a success and the consummate example of the achieved American dream. 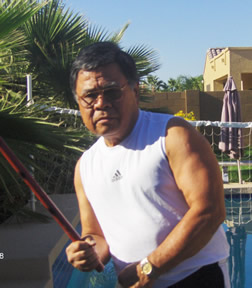